A unique prescription for healthy living 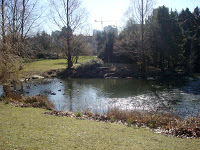 Now that spring is finally emerging from an unusually winter-y winter here in New York, my feet are itching to be outdoors. It seems that each year, my beginning-of-the-year resolution to get more outdoor exercise isn’t fully achieved until March, when the cold weather has finally passed. But as we know, most Americans spend too little time outdoors all year long. The average adult spends most of his/her day in front of a screen, and kids spend a shocking seven hours a day with electronic media, according to reports from the Kaiser Family Foundation and the National Wildlife Foundation. It goes without saying (but I’ll say it) that so much sedentary time in front of a screen is not good for our health, increasing the risk of all sorts of problems, including cardiovascular disease, obesity, and asthma.

As a teacher, it’s astonishing and more than a little depressing to realize that kids spend as much time in front of a screen as they do at school. But lately, I’ve been hearing about an innovative way to fight against the tide of sedentary lifestyles in children. Pediatricians in Las Vegas have begun giving prescriptions for nature to children. The National Environmental Education Foundation launched a program called the Children and Nature Initiative, which trains health care providers to recommend time in nature, rather than pills, as a prescription for health. (It’s only when appropriate according to the child’s needs, of course, but I think it’s always appropriate to spend more time in nature). For kids suffering from obesity, diabetes, asthma, and certain mental health issues, the doctors are now recommending more time spent in national parks and local nature sites. Here is the story from a doctor participating in the movement.

I think this is fantastic. There is an endless list of benefits to spending more time in nature. It reduces levels of many afflictions affecting Americans, from ADHD and asthma to obesity and heart disease. Studies show that outdoor walking does more for mental health than indoor exercise, and that kids who move from urban environments to greener environments have increased levels of cognitive functioning. Plus, getting outdoors will help you get to know your environment, so that you can appreciate (and ultimately help conserve) the land around you. Another bonus.

So, even if your doctor doesn’t write you a prescription for spending time outdoors, it’s highly recommended. As the National Park Service chief of conservation Rick Potts puts it, “Science is validating what moms have known for generations: Being outside is good for your health.” Spring is finally on its way, and the days are getting longer. Let’s spend more of them outside.

A short-term option with a long-term consequence

Tips for becoming a runner, from a former non-runner