Yoga as a teacher 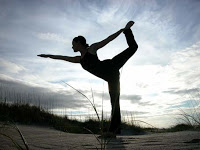 Today’s guest post is from Christine Agro, an inspirational teacher, metaphysical expert, and host of The Conscious Living Guide with Christine Agro which airs live on Sundays at 9pm ET.  You can find out more about Christine and listen to her show by visiting theconsciouslivingguide.com. She writes an inspiring story about the power of looking at yoga (or whatever strategy you use to live a healthy life) as a teacher.

When we hear about yoga it is often from the perspective of its ability to connect our body and our mind via our breath; or we hear about its tremendous health benefits of creating flexibility, strength and stamina. Rarely if ever do we hear yoga referred to as a teacher.

But it is. It is a powerful teacher, if we are conscious of all that it tells us, shares with us and shows us.

In 2001 I had been practicing yoga faithfully for years and I was teaching 11 classes a week.  I was in the best shape I’ve ever been in and completely in love with yoga. One day, I was working with a woman who had been a yoga teacher and due to an injury stopped practicing and could not get herself back into her practice.  I remember thinking, “How could anyone who taught yoga not be able to get back into their practice?”  Judgmental, yes, I know.

I am a big fan of saying “never ‘never’ the universe.” I had a friend who said to me one day, “I’ll never date a man who has a child.” A month later she was dating a man who had a two-year old and my friend eventually married him.  The universe has a funny sense of humor.  Never it and it will prove you wrong every time.

So a few months after my thought about the woman and her yoga practice, I had a cyst rupture on my ovary and it knocked me out of commission for at least a year.  I tried to get back into my yoga practice but it was hard to have to start from scratch and rebuild my strength.  I found myself forever comparing myself to where I used to be.

I was keenly aware of my ego, the fact that I was seeing myself as I used to be and even coming to my practice from a time that was long since gone. Yoga, practiced with truth, requires that we show up honestly and if we don’t show up honestly, it asks us to come again another time.

I believe one day I will create a new practice, but for now yoga itself is one of my greatest teachers.

What is yoga teaching you these days?

How to bring more movement into your classroom (free printable)