I was able to be part of a great discussion last night at our local children’s museum on how children understand race. The event was called “Difficult Conversations,” and invited parents, educators, and community members to learn and discuss how children learn about race.
The event started with a speaker, Erin Winkler, who is a professor of Africology at the University of Wisconsin-Milwaukee. She had a jam-packed presentation with so much fascinating research on how children learn about race, how stereotypes about race are formed, and what educators can do about it. After the speaker, the audience members broke off into discussion groups to talk about their experiences with race as parents and educators of young children.

I was furiously scribbling notes throughout, since this information is directly relevant to my kindergarten students’ lives. As a matter of fact, it’s directly relevant to ALL children’s lives, and that was one of the main points of the evening – all children develop racial biases, no matter how hard we try to teach them that “everyone is the same on the inside.” Instead of pretending racial bias isn’t an issue, let’s discuss it, and begin the work that is needed to change it.

I want to give you everything that Dr. Winkler shared during her talk, but in the interest of time, space, and respect for her academic work, I’ll stick to a few highlights that really spoke to me. (For more on her research, listen to her interview on how children understand race or read any of her publications.)

We can begin with this:

This idea was fascinating to me. Yes, stereotypes exist about everyone. Even white people. But the stereotypes that are assigned to some groups are more harmful than those assigned to other groups. For example, a stereotype of a white woman might be that she is high-maintenance, or bossy, or lets her children run wild. But a stereotype of a black male might be that he is dangerous, or untrustworthy, or violent. Which of these stereotypes will be more harmful to someone who is trying to get a job, or secure housing? Enough said.

As for when stereotypes begin to appear, there’s this:

I’ve read research on this before. At 3-6 months, infants categorize by race, meaning they stare longer at a person of a different race. At two years old, children use racial categories to explain behaviors. For example, if a child sees a white person doing one thing and a brown person doing another, she may attribute the reason they were doing that action to the color of their skin. It doesn’t mean they have bias towards one race over another yet.

At three to five years old, kids begin to express bias based on race. Now, Dr. Winkler made it clear that this is NOT because kids are hearing it from their parents. So interesting, since many teachers (including me!) believe that their students learn prejudice from their families. Instead, she explained that children at this age are still using race to categorize, and therefore attribute certain behaviors to certain races. This is because their little brains can’t hold on to too many nuanced ideas at the same time. Not much we can do about that.

But – and here’s where a potential solution comes in – kids learn from external factors as well. Society teaches them early on that race is a category that matters, more so than left-handedness or hair color. They see people in society separated by race, and they make assumptions based on this information. Who lives in a certain neighborhood, who appears in Disney movies, who is talked about in school curriculum. And while the ideas kids are forming are still just stereotypes at this point in time, this next part made it clear how we go from stereotypes to racism so quickly in our society: 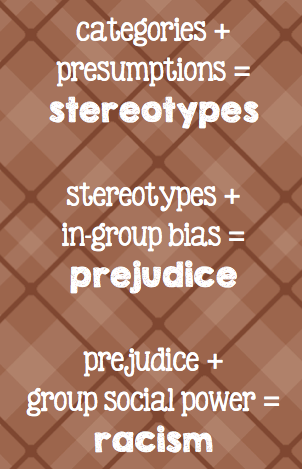 This was such a clear and concise definition of words that are often used interchangeably. While stereotypes and prejudice exist at a personal or social level, racism is a systemic problem that results from prejudice plus certain groups having more power than others. This is both bad news, and good news. The bad news is that racism is a large, system-wide problem. The good news is that we can combat racism by identifying and combating all the levels below it (stereotypes, in-group bias, prejudice, group social power).

The last part of the talk was the one that excited me the most – what we can do to fight against racism. Usually, discussions on racism and social injustice in education are tough, because you leave feeling powerless to make an actual difference. Yes, we can teach multicultural curriculum. But Dr. Winkler, and many others, warn that multicultural curriculum needs to be more than just teaching about “heroes and holidays.” Many teachers (with very good intentions) teach about Martin Luther King, Rosa Parks, and Cesar Chavez, but ultimately deliver a message that says “hooray for these heroes, now racism is over.”

In addition, many teachers teach that we should all be colorblind. “We should focus on how deep down we are all the same!” and other such messages are taught in lots of classrooms. I’m guilty of this myself, as I have done the eggs-are-the-same-on-the-inside activity, and many similar lessons in the past.

Instead, teachers need to teach students to value diversity, and identify racial bias when it is present. We learned about a fascinating study called “In blind pursuit of racial equality?” (Apfelbaum et al., 2010). In it, one group of students was taught a central message that downplayed racial distinctions, instead promoting the idea of valuing how similar we all are. (In other words, let’s be colorblind.) The other group of students learned that race is important, because racial differences make us special.

The results? The kids in the first group were much less likely to recognize subtle racism, and explicit racial bias, in a follow-up story.

Instead of teaching kids to ignore color, we should instead teach them to value the diversity of all humankind, and celebrate it. To me, this is true anti-bias education, because it doesn’t ignore differences among our students. Instead, it encourages kids to notice differences, and speak up when injustices occur.

I’m very excited to explore how to teach this with my kindergarten students. I have done some teaching on valuing diversity in the past, and plan to post some resources and ideas for how to do it very soon. I am always hoping to strengthen my understanding of anti-racist and anti-bias education. Here are a few quick links that I find really helpful:

Sun & Moon partners in the classroom: a freebie

How number sense develops in kindergarten