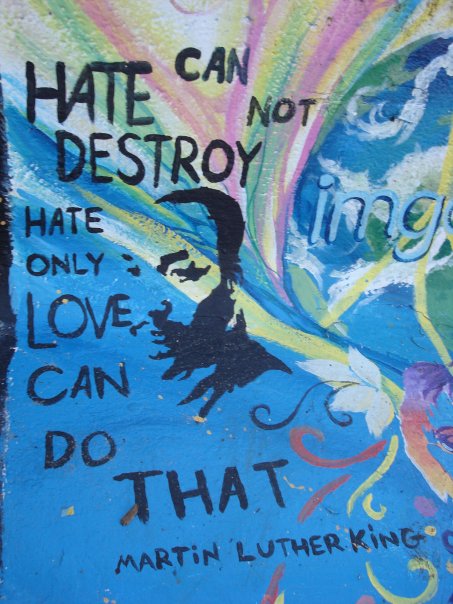 I don’t have words for what I’m feeling after yesterday’s election results. Or rather, I have too many words for what I’m feeling – confusion, disbelief, frustration, dismay, anger, shame, uncertainty. But mostly, sadness. I’ve never been hugely into presidential politics. Maybe it’s because it’s always felt so far away, so removed from my life and the people I love. Maybe it’s because presidential hopefuls don’t tend to spend much time on topics I’m most passionate about (education, the environment, social justice). Whatever the reason, I don’t tend to have emotional connections to candidates. Barack Obama’s election was exciting and full of hope, but typically, I don’t get emotionally wrapped up in any of the presidential races.

And until yesterday, this presidential race was no different for me. The whole thing was too ridiculous to invest emotional energy in. So many horrifying things were said by Trump and his supporters that I didn’t want to waste my time by paying attention to any of it. I knew who I was voting for. Hillary Clinton, while not my favorite candidate, had so many traits that would make her a qualified and effective president. And there was that added awesomeness of being the first female president.

I knew who I was voting for, and, perhaps naively, I didn’t think Trump had a legitimate chance of getting elected. Looking back, if I thought my country could elect a man who sexually assaults women, vows to ban all Muslims, and is openly supported by the KKK, I might have paid more attention, and done more to stop it.

But I didn’t. And I feel an immense, deep sadness. The sadness seems to be lingering, and it only grows when I hear stories of Muslim students feeling afraid to come to school. When I hear of families fearing that they’ll lose their health insurance.

And when I hear from one of my students’ moms that her daughter, upon hearing that Trump won the election, asked, “Mom, is he going to make it so that people with black skin can’t come to my school anymore?”

What shame. That a kindergartener would be asking that question about her country’s soon-to-be-president. And that her mom had to hesitate before answering, “No,” because she didn’t know with what certainty she could say there is no way something like that could happen.

My sadness lingers, and I will let it for a few more days. But after that, I know, it’s time for action. My personality, which is Type A All the Way, is searching for a plan, an actionable plan for how to move forward. I need to figure out how to talk to my students about these issues, so that they know they’re safe and loved, no matter who they are. I need to become more active in local politics, because the local arena is where we as individuals have the most power.

And I need to become more emotionally involved in the fight to support people of color, immigrants, queer and trans people, low-income families, and other marginalized groups. Part of the reason I’ve been unattached to presidential candidates in the past is because I am sick of the politics, and feel powerless to do anything about it. But I realize that my ability to be unattached also reflects my privileged status as a White woman. Going forward, I want to be more conscious of that fact, and do what I can to support the work that has already been going on in the fight for justice. Here’s a list of some possibilities.

What I could have said: Addressing racial stereotypes in kindergarten